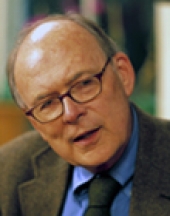 James Chace last spoke at the Carnegie Council on June 16 about his latest work, 1912: Wilson, Roosevelt, Taft and Debs—The Election that Changed the Country. We present an excerpt from the introduction that Carnegie Council president Joel Rosenthal gave on that occasion.

James is somebody whom I admire for his many virtues. It is appropriate that we appear here tonight under the banner of “ethics.” James is a virtuous character. I would like to use this occasion to share a few of those virtues with you, although the list could be much longer.

The first is the virtue of hard work. I used to think that I was a very hard-working person-coming from New England, I have that sort of Puritan work ethic—until I had the occasion to travel with James, himself a New England native. I have this unforgettable memory of hotel clerks coming to his room every evening with piles of faxes for him and James delivering the faxes back in the morning, having worked all night. He really humbled me in terms of his capacity for work.

But being a very prudent fellow, James balances that virtue with a capacity to have fun. As I also know from traveling with James to Shanghai and looking for a jazz club late one evening, he is not so earnest a person that he doesn’t enjoy a good time.

Another one of James’s virtues is a generosity of spirit. When I was young, an obscure program officer here at the Carnegie Council, I remember getting a phone call from a gentleman named James Chace, whom I knew only by reputation. James was organizing a conference on realism, and somebody had told him that a young man named Joel Rosenthal had written something on realism that might be interesting. With incredible fair-mindedness and decency, he said, “I’m going to invite you to this conference to hear what you have to say about realism.”

It has always struck me about James that he is forever open to new ideas and to new people, which I think is truly admirable. It’s my modest hope that this is why James likes spending time at the Carnegie Council.

Finally, there is another virtue that James embodies. It is what I would call an aesthetic sensibility, a certain artful way of looking at the world. You see it in his writing. When I read his biography of Acheson, for instance, it made me think that Acheson was fortunate indeed to have a biographer like James, who could match wits with his intellect and with his experience in the world.

← New Rules for War? Accountability: How to Treat Unlawful Combatants →