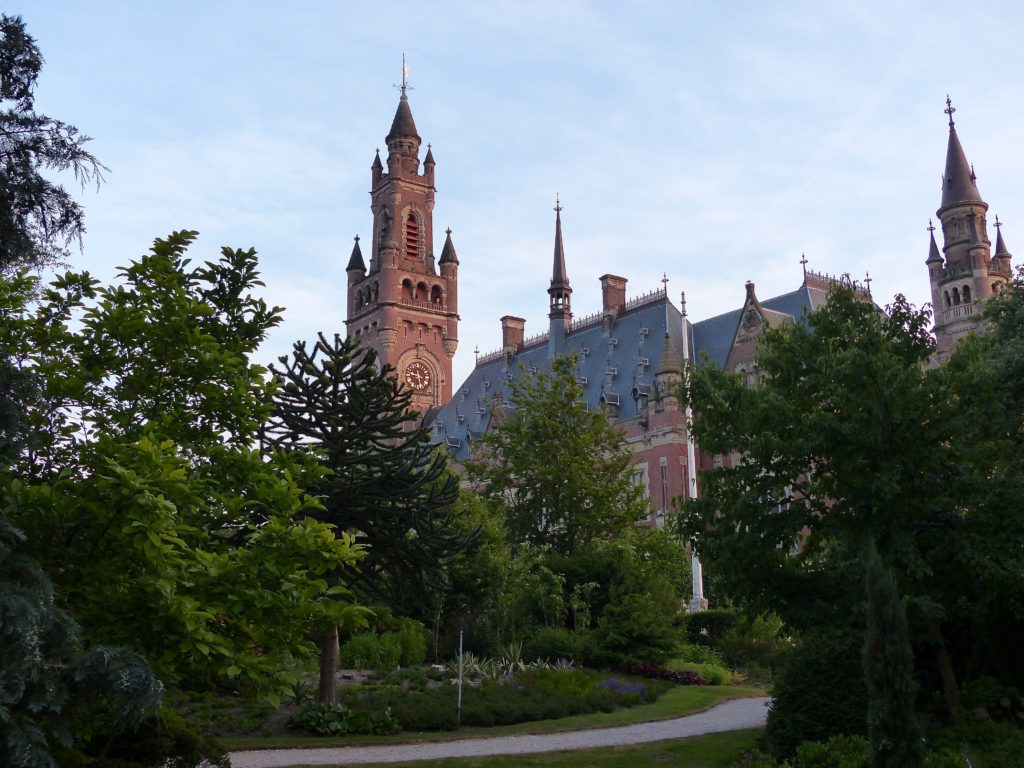 This speech was given as part of Yale Law School’s Global Constitutionalism Seminar 2012, convening on the occasion of the Centennial of Carnegie Corporation, New York, and of the Peace Palace, The Hague, and celebrating Andrew Carnegie’s vision of international justice. The four-day event was held at the Peace Palace in The Hague from 29 August–1 September 2012.

There are few names more deserving of close association with the word “peace” than Andrew Carnegie. Carnegie alone had the vision and resources to invest in the first global institution devoted to the pursuit of peace. And those of you who know his life story know how hard he worked to lobby, cajole, nag, and flatter Kaisers, kings, prime ministers, and presidents to make his dream a reality.

Carnegie had seen first-hand the barbarity of industrial war in the American Civil War. It seemed like lunacy to go through such mayhem again. There had to be a better way.

While “Europe enjoyed a rich fat afternoon,” as Barbara Tuchman put it so memorably in The Guns of August, Carnegie questioned the essence of imperial Great Power politics and offered an alternate future. He dampened the enthusiasms of armchair warriors. He debunked the glorification of war. His anti-imperialism encouraged deep thought about the purposes of political power, never forgetting the responsibilities that came with it. His aspirations for the positive possibilities for Great Power politics should not be forgotten.

The theme I would like to emphasize in my brief remarks—in the spirit of Andrew Carnegie—is “normative shift.” Norms are what we understand to be expected and required behavior. Carnegie raised our expectations—and this, in the end, is his most enduring peace legacy.

For the purposes of our discussion, consider three specific norms that have evolved since Carnegie’s era and are still evolving. All are related to the idea of the “just war.”

Just Cause: Tension Between Peace and Justice

The norm of “just cause” is one of the most fluid norms of the last century. Carnegie assumed that peace was the highest aspiration of individuals and nations. Yet this was too simple an understanding of the moral dimension of international politics.

There is a tension between peace and justice that cannot be ignored. This tension is the first premise of the “just war” idea. It was present 100 years ago as much as it is today.

Theodore Roosevelt—long a target of Carnegie’s peace advocacy—may have had Carnegie in mind when he offered this statement in his Nobel lecture of 1910. Roosevelt declared:

“Peace is generally good in itself, but it is never the highest good unless it comes as the handmaid of righteousness; and it becomes a very evil thing if it serves merely as a mask for cowardice and sloth, or as an instrument to further the ends of despotism or anarchy. We despise and abhor the bully, the brawler, the oppressor, whether in private or public life, but we despise no less the coward and the voluptuary. No man is worth calling a man who will not fight rather than submit to infamy or see those who are dear to him suffer wrong.”

Masculinity aside, Roosevelt made the essential point that not all war is equal. There are some things worth fighting for—indeed, there are some duties that cannot be shirked. In addition to self-defense, the most obvious duty is to protect innocent victims, especially the weak. We cannot be indifferent to suffering.

Today, our moral framework for “just cause” is dominated by the principle of the “responsibility to protect” [R2P]. Yet for all that R2P does on both the aspirational and operational levels, it suffers from the same limits of all international declarations and codes. It sets a high bar in terms of normative expectations. But it cannot ensure that all actors will see the same conflicts—the same empirical evidence—in the same way.

The norm is established. But what can it deliver? This is the open question of the day.

The Rules of War

Second, Carnegie assumed, naively perhaps, that treaties and agreements would be binding. Carnegie had little appreciation for the imperatives of power politics—especially the notion that in extremis, leaders would do what they had to do. One of Carnegie’s biographers, Joseph Frazier Wall, described this blindness well:

“Any man who throughout his long business career, had made then broken as many pooling arrangements and commercial pacts as Carnegie should have had a more sophisticated skepticism about diplomatic agreements, but Carnegie regarded them with more reverential awe then the Holy Scriptures.”

For some reason, Carnegie did not apply lessons learned from the hard knocks of business to the arena of international politics. (Wall, Andrew Carnegie (1970) p. 913.)

If consensus and binding agreements are not always possible, perhaps the best that can be hoped for is an agreed framework for accountability. We see possibilities for productive moral argument in the second set of criteria for the just war, jus in bello. The familiar principles of protection, discrimination, and proportionality give us the tools to make distinctions and draw lines, even if these judgments ultimately rest in the eyes of the beholder.

Contemporary history shows that when the use of force is necessary, there is pressure to be accountable to moral rules. As President Obama put it in his Nobel lecture:

“I believe that all nations—strong and weak alike—must adhere to standards that govern the use of force. I—like any head of state—reserve the right to act unilaterally if necessary to defend my nation. Nevertheless, I am convinced that adhering to standards, international standards, strengthens those who do, and isolates and weakens those who don’t.”

The current tests to the standards President Obama mentions are well known. His own decision to kill al-Qaeda targets using an extended drone campaign is a prime example. The ascent of asymmetric war has raised moral challenges to the powerful and weak alike. Technology enables lethal force to be used with great precision. And yet collateral damage—the unintended and inadvertent killing of innocent non-combatants—remains a troubling consequence.

The steadily increasing use of drones raises a host of uncomfortable questions. One of the most profound has to do with crossing the threshold to use force. Does the opportunity to use lethal force with impunity (that is, without risk to the stronger party and increased risk to the weaker party) make it easier to give the command?

Similarly, those on the less powerful end of the asymmetric spectrum—those who fight for freedom against established regimes—face difficult choices of their own. Not all tactics and targets are morally equal.

The work that is done in these halls—and by peacemakers and human rights advocates everywhere—is testament to the belief that rules of accountability matter, even if there is no easy formula, one-size to fit all.

Finally, since the end of the Cold War, the entire war paradigm—and the norms that come along with it—has come into question. The so-called “war on terror” continues in certain respects under an ambiguous status. Targets are selected, prisoners kept, and operations continue, even if war has not been declared, the theaters of conflict not precisely defined, and the end of hostilities not specified.

In addition, humanitarian actions roll along, one after another. It can be argued that we are in a continuous cycle of perpetual war.

As my co-panelists have explained in their work, the nature of war has changed dramatically. Threats now come from small groups and small weak states. Terror networks resemble criminal gangs and organized crime more than an opposing army.

Given these changes, might the conflicts of the 21st century look more like cooperative policing than the industrial wars of times past? Like policing, the security challenges of today involve keeping order, and they go on indefinitely. Will this result in a paradigm shift from interstate war to global policing?

There is an important ethical dimension to this idea. In his new book The Better Angels of Our Nature: Why Violence Has Declined, the moral psychologist Steven Pinker uses statistical evidence to show that over the centuries, human beings have become less inclined to kill each other and to engage in barbarous and cruel practices. As Pinker puts it, “Brutal customs, once commonplace have been abolished: cannibalism, human sacrifice, heretic burning, chattel slavery, punitive mutilation, sadistic executions.” This trend carries over into warfare. He goes on to document how battle deaths worldwide have declined drastically over the course of world history—especially since the end of the Cold War.

Pinker does not suggest that human conflict is finished. Rather, he concludes: “… we still harbor demons like greed, dominance, revenge, and self-deception. But we also have faculties that inhibit them, like self-control, empathy, reason, and a sense of fairness.” It is these latter faculties that seem to be winning out.

Pinker’s provocative argument suggests the changing nature of war may be accompanied by a normative shift. If this is so—if this is indeed the future of war—it might be possible to do better than we have in the past when it comes to upholding certain rules and norms. We may not perform to our ideal norms. We may often fall short. But perhaps Pinker is correct. Perhaps our performance is getting better because our values are shifting toward a more demanding set of expectations.

Whatever you think about this question of moral progress, there is no escape from the idea that war and peace are moral propositions, subject to changing norms and expectations. Nothing could be more important than mapping out and arguing over rights, duties, and responsibilities. These norms become the default position for leaders and citizens alike. In large part, these norms shape our worldview and determine what we do.

To conclude: I am a firm believer in the idea that if you are not trying to improve, then you are most likely getting worse. Andrew Carnegie always tried for progress in the face of long odds. It was often one step forward, two steps back. But without these efforts and others like them, we might slide from skepticism to cynicism—and ultimately, to nihilism. Like Andrew Carnegie, it is important that we keep imagining a better future. This, in the end, is exactly what the concept of peace is good for.

← The Last Protestant? Saddam’s Pistol, and Yours →