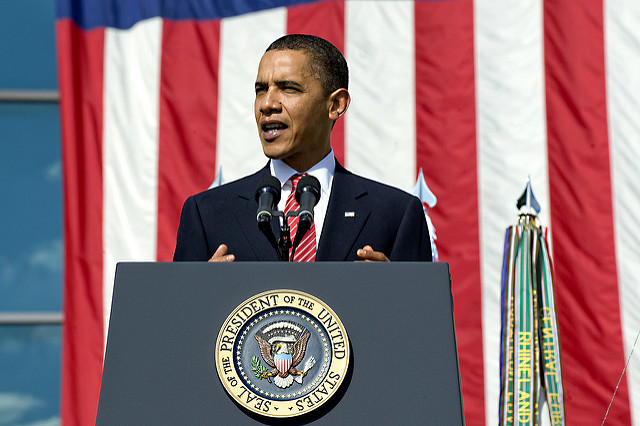 As President Obama completes his first year in office, little attention has been given to a question that sparked raucous argument during the campaign. How would Barack Obama’s religious beliefs affect his performance as president?

During the campaign, the question of Obama’s long relationship with Reverend Jeremiah Wright loomed large. In some quarters, so did Senator Obama’s middle name. The Obama candidacy was widely and deeply opposed by religiously-inspired groups against abortion rights and gay marriage. There was similar strong opposition from those arguing for “moral clarity” on the war on terror, calling into question Obama’s credentials to fight Islamic religious extremism.

Despite these voices, the Obama campaign managed to attract some faith-based allies of its own. These were newly energized groups with progressive views on poverty, health care, and climate change as well as their own views on “just war.” Themes of social justice resonated through the candidate’s platform. An astute listener could hear echoes of connection to the religious roots of the civil rights movement.

Against this noisy background, President Obama entered office without a religious identity as distinct as that of George W. Bush. The impression of Obama’s ambiguous religious identity was reinforced by the life story he inherited as well as his deliberate choices. His Muslim-Christian parentage, peripatetic biography, and lack of life-long association with any single church made it unsurprising that he did not have a default place to worship when he and his family moved to Washington, DC.

Obama’s best-expressed affinity to a theological tradition places him in the arc of Reinhold Niebuhr, a favorite of those whose Christian faith emphasizes pluralism and social justice over any allegiance to a particular doctrine or sect. Niebuhr’s ecumenism is noteworthy for its combination of spirituality and openness. At its height in the 1940s and 50s, Niebuhr’s sermons, speeches, and writings helped propel inter-faith dialogues that included not only Protestants, Catholics and Jews, but secularists and non-believers too.

As he took office, it appeared that Obama’s religious profile would remain very different from that of his predecessor. The new president would be more Reinhold Niebuhr than Billy Graham. Niebuhr’s model is faith-based, for sure. But it steers away from doctrinal proclamations and it is highly sensitive to the dangers of self-righteousness. Rick Warren, the conservative and therefore controversial choice to deliver the Invocation at the inaugural ceremonies, seemed to nod to the president’s preferences in his attempt at ecumenism and humility in his remarks.

With all of this as prelude, I was startled by a Politico article published last summer—six months into the president’s term—titled “Obama Invokes Jesus More than Bush.” In his first high-profile speeches of his presidency—including widely cited lectures at Cairo, Notre Dame, and Georgetown—President Obama spoke of the Christian faith in language more explicit than expected. This choice of language may have been a strategic decision meant to counteract those who have questioned his faith. Or it may have been a deliberate effort to rally his progressive faith-based constituency. Whatever the explanation, it is important to note Obama’s language in describing faiths other than Christianity is also highly detailed. In his opening remarks in Cairo, the president brought “the good will of the American people and a greeting of peace from the Muslim communities in my country: assalaamu alaykum.” He concluded the speech with direct quotes from the Koran, the Talmud, and the Bible.

Obama’s engagement with religious language signifies a commitment to moral dialogue after a period of high moral assertion. His goal seems to be rescuing “moral clarity” from those who confuse it with “moral certainty.” Moral clarity asserts that while we can agree on what is irretrievably wrong (killing of innocents, enslavement of peoples, destruction of our planet) we also understand that there are multiple conceptions of the good. Let’s not proclaim that we have the ultimate answer to what is good for everybody; and in our pursuit of our vision of the good life, let’s not forget that we often make uneasy compromises.

President Obama used his moment of maximum worldwide attention in his Nobel lecture to explain his view of the proper relation between religion and politics. His argument respects the transcendent powers of religion as an essential element of human flourishing. Yet it emphasizes limits. As the president said, “evil exists in the world” and it must be confronted. Yet “no Holy War can ever be a just war. For if you truly believe that you are carrying out divine will, then there is no need for restraint—no need to spare the pregnant mother or the medic, or even a person of one’s own faith.” In the tradition of Lincoln, Obama seeks commitment without excess, fidelity to principle without fanaticism.

It would be a mistake to oversimplify Obama’s first year in office as essentially a story of the rise of a new technocratic regime. There is more going on here; there is the return of a new moral clarity that is genuinely humble, fact-based, and pluralistic. Pluralism can be defined as empathy for diversity while emphasizing what is common in humanity. This is a deeply American ethic. And it appears to be a priority of the president in both word and deed.

← Realism as Pragmatic Cooperation Is Peace Worth Fighting For? →