Life, Money, and the Pursuit of Happiness 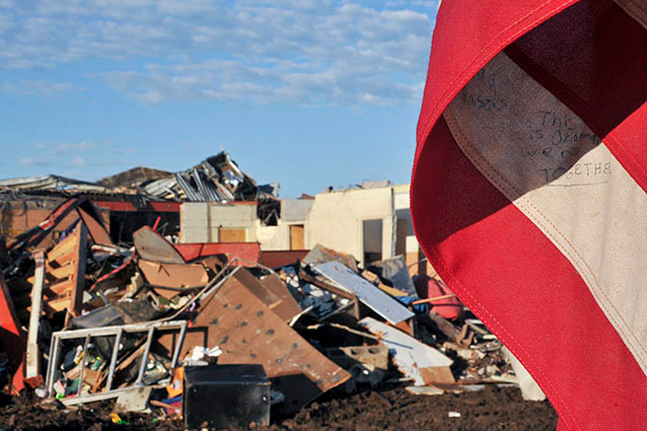 The day after the Moore, Oklahoma tornado of 2013, a single image dominated media coverage: a photo of the two-foot thick concrete and steel bank vault of the Tinker Federal Credit Union. The vault was the only thing left standing on a flattened city block. Twenty-two people had miraculously walked out of the vault alive and unharmed after taking refuge amidst the deposit boxes. Just down the road, 24 others had perished, including seven children in the Plaza Towers Elementary School.

It seemed a cruel comparison. The bank had a vault to protect its money while the school had no safe room to protect its children. News reports following the disaster cited the $1.4 million cost of building a tornado-proof shelter as the reason why the aging school was not equipped.

While it is a long stretch to compare a bank to a school, the symbolism of the indestructible vault against the pancaked elementary school is worth lingering over. As the frequent target of thieves and criminals, money rightfully demands its place of protection in our culture. Banks should be fortresses. But what good is safe money without safe children? We have all heard the folk wisdom that money alone cannot buy happiness. We now have the social science to back this up.

One common finding of the many “happiness” studies that have sprung up out of the fields of economics and positive psychology is that money itself (income, consumption, and wealth) is only one component in measuring overall well-being. After reaching a threshold where basic needs are met, material factors diminish in their ability to deliver individual and collective happiness. This leads to the conclusion that measures of economic growth and prosperity such as gross domestic product (GDP) should be complemented by non-financial measures such as indicators of health, education, employment, political participation, environmental conditions, and public security.

What do these findings mean for public policy? Nobel Prize-winning economist Amartya Sen suggests that the pursuit of happiness requires first and foremost the removal of “unfreedoms.” An unfreedom is characterized by the depravation of a basic need—for example, lack of access to medicine or schools, disenfranchisement from the political process, or the denial of a safe and healthy place to live and work.

Unfreedom’s twin is inequality. In winner-take-all systems, have-nots tend to question the legitimacy of those in power. A sense of unfairness and injustice leads to instability and discontent. So rather than focusing on wealth as an end in itself, Sen argues it is more useful to view wealth as a means to enabling individual freedom and fulfillment.

Americans have long understood the corrosive effects of excessive individualism, materialism, and economic inequality. At the beginning of the twentieth century, Thorstein Veblen coined the phrase “conspicuous consumption”—he railed against the “invidious distinctions” made in popular culture between rich, working class, and poor. In mid-century, John Kenneth Galbraith critiqued “the affluent society,” followed by Christopher Lasch’s lament of the “culture of narcissism,” the product of crass materialism and lack of solidarity. In 2013, George Packer chronicles what he calls “the great unwinding” in his book of the same title. The unwinding is characterized by America’s retreat from “collective structures … that channeled the aspirations of ordinary people.”  Examples include “state universities, progressive taxation, interstate highways, collective bargaining, health insurance for the elderly, credible news organizations.”

On the road to happiness, increasing the size of the pie is not enough. As Rockefeller University professor Joel E. Cohen has put it, we must also look at our manners at the table. We should be asking ourselves, how is the pie shared? Does everyone have a fork? Are the winners taking into account the interests of the losers? Is there reciprocity and recognition of mutual interests built into the system of access and distribution?

The system we live in today is global—and there is no doubt that the globalization of the world’s economy has lifted hundreds of millions out of poverty. However, globalization also continues to concentrate wealth and power in the hands of the relatively few. Occupy Wall Street and protests in cities as diverse as Moscow, Tel Aviv, and Cairo are the predictable result. The recent demonstrations in Rio de Janeiro suggest that backlashes in this vein will continue—especially when public investments are perceived to benefit entrenched government and corporate interests rather than the middle classes and the least well off.

Expectations of the global middle classes are rising. Their happiness has something to do with material gain—but it is more than that. As the economist Joseph Stiglitz tells us in his joint research with Amartya Sen, no single measure can capture well-being. Happiness depends on multiple human needs like respect, dignity, and recognition. It also hinges on a sense of common purpose—as the French put it, fraternité, feeling part of something larger than one’s self.

About 100 years ago, Herbert Croly, one of the founding editors of The New Republic Magazine, listed his concerns about money and happiness in a book called The Promise of American Life (1909). The Gilded Age had left America with a set of challenges that sounds strikingly current: expanding corporate power, growth of special interests, crass materialism, diminishing prospects for the middle class, and ineffective political leadership. Concentration of power had put American democracy in jeopardy. Big corporations, interest groups, and their leaders were not enhancing democratic institutions. They were intentionally gumming them up to reserve power for themselves or co-opting them to their will.

As Croly put it, “The experience of the last generation plainly shows that the American economic and social system cannot be allowed to take care of itself, and that the automatic harmony of the individual and the public interest, which is the essence of the Jeffersonian democratic creed, has proved to be an illusion.” He then went on to make his case for “Hamiltonian means to serve Jeffersonian ends.” By this he meant that some central powers must be exercised to check and balance countervailing powers of corporate and special interests. This exertion of central power would be for the purpose of empowering local, regional, and individual initiatives, enabling them to flourish.

It took the Republican Theodore Roosevelt to deliver on the progressive agenda that followed (trust busting, labor rights, professionalizing the civil service). This was the birth of modern America as we know it, with the federal government insisting on moral minimums for state and local authorities. It remains to be seen if similar reforms are in the offing.

The Tinker Federal vault is an apt metaphor for 2013 America. Money remains an overwhelming presence in American society and culture; we have built a system that celebrates wealth and protects it from all manner of disaster. This includes “too big to fail” insurance in the form of bailouts and many forms of business subsidies to promote economic growth. Yet the image of the battered vault also suggests inadequacy and vulnerability. We are now in a post-industrial global economy with challenges similar to those we’ve seen before. The pursuit of wealth will continue to be the engine of American society. But let’s not forget that the pursuit of happiness demands more. The signers of the Declaration of Independence pledged not only their lives and fortunes, but their “sacred honor.” There are some things that cannot be bought.

← Drones: Legal, Ethical, and Wise? Threats Beyond the Headlines →