From Andrew Carnegie to Hans Morgenthau: A Lesson in Ethics and International Affairs 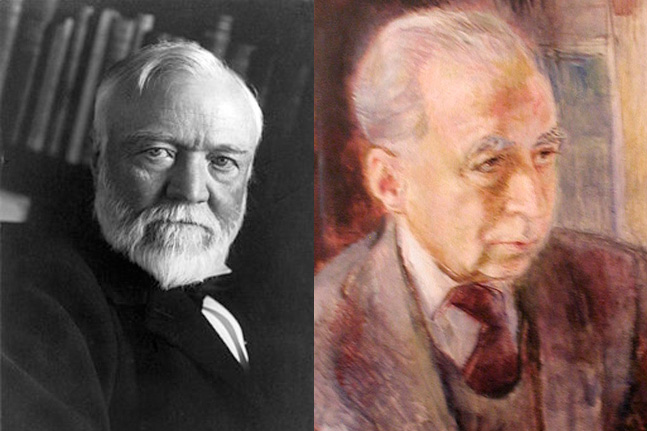 On February 10, the Carnegie Council celebrated the 90th anniversary of its founding by noted New York philanthropist Andrew Carnegie. Later this year, we will celebrate the 100th anniversary of the birth of international relations theorist Hans Morgenthau (1904-1980), a long-time friend and advisor to the Council. To commemorate these two occasions, presents an edited transcript of a recent lecture delivered by Carnegie Council President Joel Rosenthal to a group who are participating in a trial Carnegie Council Young Associates Program for six months (January to June).

As Rosenthal explained to his youthful audience, Carnegie and Morgenthau make an instructive pairing. Carnegie, an idealist, stood for “never again war,” while Morgenthau stood for “never again genocide.” Nobody wants to go to war, yet genocide is also intolerable. How do you choose between these competing moral claims? This is where ethics comes in. “Many people think that ethics means the Ten Commandments, but in fact it is a process of reflection in the effort to choose between two goods – or, more often than not, the lesser of two evils,” Rosenthal said. He added that today, the Carnegie Council’s mission is more important than ever. “Conflict, the use of force, the pursuit of human rights, the problem of global inequality – these issues define our times and form the very essence of the Council’s work.”

JOEL ROSENTHAL: The Carnegie Council is an educational institution. We are here to educate people and to be a resource. Where did our mission originate? It came from Andrew Carnegie, whose likeness is there on the wall. Andrew Carnegie was the Bill Gates of his era. He was the founder of the U.S. Steel Corporation. He was known, both in the United States and Europe, as the richest man in the world.

Carnegie spent the last third of his life giving away most of his fortune, and that’s why his name is still on the lips of so many people. His famous line was, “A man who dies rich dies disgraced.” Today there are twenty-one different organizations with Carnegie endowments. The Carnegie Council on Ethics and International Affairs is one of the smallest; we were one of the last to be created.

So why did Andrew Carnegie create this institution? He had two major philanthropic interests. One was education. Some of you may know about the Carnegie libraries. We have Carnegie and several others to thank for the idea of the public library as we know it today.

Carnegie’s other major preoccupation was with what he called “the quest for world peace.” Carnegie was deeply involved in the Hague Conventions of 1899 and 1907. The idea was very simple. Civilized societies have law – a procedure of mediation and arbitration – for resolving conflicts. Carnegie’s view was that this system would inevitably take hold internationally. Remember, he lived in a progressive time, an era when the best and the brightest believed that the world was coming together and that it was only a matter of time before civilization would win over barbarism.

So how does one promote world peace? Like other internationalists of his day, Carnegie put stock in the idea of a league of nations, of a permanent court of arbitration – in other words, the notion that we need to create international institutions to accomplish the goal of world peace.

But then as he neared the end of his life, Carnegie said, “It’s not enough to build these institutions. We also have to change the way people think.” That’s the reason Carnegie founded what was then known as the Church Peace Union in 1914, exactly 90 years ago. In the early days, it was essentially a collection of academicians, religious figures, and other leaders in charge of the moral and ethical life of America. Their mission was to promote the ideal of world peace in the nation’s churches and schools in an ecumenical, non-sectarian way.

The first board of trustees had an ambitious idea. “There’s all this talk about world war in Europe and lots of unsettled business there,” they said. “Let’s hold a conference and bring together Europe’s educational, religious, and political leaders to be a force to promote the peace policy.”

The timing of this conference could not have been worse. It took place in Constance, Germany, on August 1, 1914 – the very eve of World War I. Some of the conference delegates who had come from the U.K. and the U.S. were actually detained in Germany as hostilities broke out. They got into a panic and telegrammed to Andrew Carnegie: “Help, we’re stuck. Get us out of here.” Mr. Carnegie sent a check and got them all out.

The story is actually quite profound. Early internationalists like Andrew Carnegie believed in what we would today call “peace at any price.” Their belief sprang out of a very different context from ours; still, that was the approach. They were basically pacifists, calling attention to the insanity (as they saw it) of militarization and of spending so much blood and treasure on war.

But then you see this remarkable idealism running smack into the realities of the 20th century, which after Carnegie’s death turned out to be a century of mass murder and genocide. Between Hitler, Stalin, and Mao, the body counts ran into the millions.

Which leads me to the other portrait on the wall here, that of Hans Morgenthau. For previous generations, Morgenthau was a preeminent international affairs theorist. His classic work, Politics Among Nations, came out in 1948, earning him a reputation as the father of modern political realism.

I find it poignant that Morgenthau’s portrait hangs here in the Carnegie Council, because in his day he was known as the toughest of realists. He was anti-communist. He thought that states were all about maximizing their power. “If you were looking for a variable to predict behavior, just remember that nations are going to act in their interests,” he would say.

So why is he here at the Carnegie Council on Ethics and International Affairs? Because what Morgenthau said upon careful reading is that international affairs ultimately comes down to a notion of competing moral claims. The very first lesson for students of international affairs is to understand power. Human relations are inevitably about power interests and that’s how people, and nations, interrelate. To try to deny that is just a fundamental mistake that will lead to disaster.

But then he added: “We also have to account for morality. You can’t just boil it down to power maximization, that “the strong do what they will and the weak do what they must.” There are some values that matter beyond maximizing power. It’s a question of how you use power, in the service of what principles. And power brings certain duties as well as certain restraints.“ That for Morgenthau was the beginning of ethics.

← Shall We Call It An Empire? From the Margins to the Mainstream: A Blueprint for Ethics and International Affairs →