Democracy as Myth and Fact 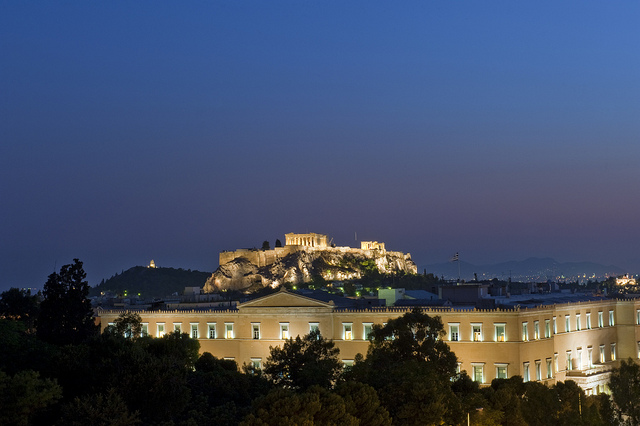 This piece was written for the International New York Times Athens Democracy Forum, September 13-15, 2015. Carnegie Council was proud to be a co-sponsor of this Forum.

Myths give meaning to our lives. They are stories created to explain the human condition—creation, death, heroism, dignity, pain, pride, and suffering. There is an elevating character to myths. Gods and humans share the stage. One cannot come to Greece without feeling inspired by the ancient classical myths that shape so much of our culture and society.

And yet there is also an instrumental aspect of myths. As the French sociologist Roland Barthes put it, myths are often created by the powerful to serve their own interests, almost always at the expense of the weak.

The summer of 2015 strained the heroic version of democracy in new and painful ways. Europe faces three urgent challenges: a heartbreaking refugee crisis; uncertainty about the Euro; and unnerving security concerns in Ukraine. The United States exhibited its own strains, best exemplified in the kick-off to the 2016 presidential campaign. The Republican Party frontrunner Donald Trump gained support with anti-immigration and anti-China positions supplemented by the simple slogan “Make America Great Again.”

The events of this sour summer illustrate a structural problem. Democratic leaders see themselves as accountable to those who put them in office—as they should. However, the biggest challenges they face extend beyond the narrow confines of their constituencies. Vast migration of peoples forced from their homes by political and economic upheaval must be met by cooperative responses. So too must currency crises, security concerns, and of course, the other most urgent issue discussed this season, climate change.

Do democracies have the capacity to adjust? Can they expand their ideas of national interest to tackle collective challenges? Can they function in ways that serve the weak as well as the strong? I am an optimist. But the results are not certain.

Democracy is an ethical system because it places authority in the hands of the people it governs. When functioning optimally, democracy balances power to prevent exploitation, protect communal life, and empower individuals to reach their highest potential. Democracy is built on the concepts of accountability and openness. Its strength is its ability to self-correct.

The correction needed today is two-fold. First, there is the need to see the myth clearly, for what it is. We should understand democracy in its many forms: as political rhetoric, a rallying point for popular sentiment, reinforcement of powerful interests, expressions of desire, and the product of history and experience. The myth is not received wisdom. It is interpreted and applied. Its ultimate meaning is up to us.

This leads to a second correction: the need for democracies to see their interests bound to the interests of others. This does not mean that accountability sits only on the shoulders of the most powerful. Every citizen and nation must take responsibility for his actions. Yet the moment calls for more solidarity and collective “can do” than we currently see.

How best to balance accountability and solidarity? This is the question of the moment. It is a values question, not an engineering problem. For democracy to continue to be worthy as the ethical standard worth striving for, it must demonstrate results that reach beyond individualism and parochialism. It must also have the capacity to stand its ground against those who would co-opt the language of democracy to suit their narrowly self-interested power aspirations.

The Athens Democracy Forum presents an unusual opportunity for dialogue. While dialogue may seem a weak instrument in the game of power politics, it should never be underestimated. Two of the greatest voices in American democracy—Jefferson and Lincoln—made it clear that they believed the power of the pen is mightier than the power of the sword. Those who have the power to shape the narrative of democracy may in the end be the most powerful actors of all. Let us work together to try to see things clearly, to sort out the myth in light of the facts, at this critical moment for Greece, for Europe, and for the world.

← Compromise and Rotten Compromises: A Reflection on the Iran Deal Rising Fences: Migrants, Borders, and a New Frontier for Ethics →