Can We Succeed Where Carnegie Failed? 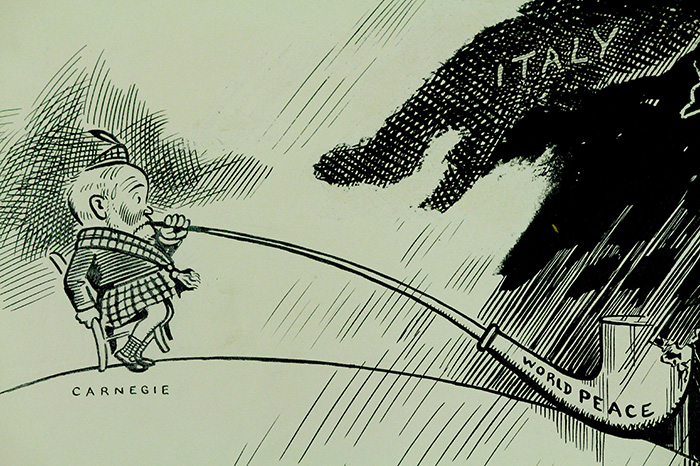 This article was first published in The Scotsman newspaper on August 19, 2010, the same day that  Dr. Rosenthal spoke at the event, “Is Peace Worth Fighting For?”, organised by the Carnegie UK Trust, at the Festival of Politics in Scotland.

The same Dunfermline-born Andrew Carnegie who spent his wealth on funding libraries and other grand institutions across Britain and America died a disappointed man, having failed to achieve the one greatest vision of his later life—a way of preventing war.

Carnegie had always made a clear distinction between philanthropy and charity. Where charity was about the relief of immediate suffering, philanthropy was about changing lives for the better. His investment in libraries was about helping people to help themselves towards a better life.

A Scot who had made his millions in America, he foresaw globalisation long before anyone had thought of giving it a name. He saw connections across business, industry, and innovation. He also believed that as human societies continued to evolve, their attitudes and beliefs would converge, resulting in shared ideals and common global goals. He also predicted that the world would increasingly adopt the English language as standard, trying without much success to get the U.S. President to adopt a new simplified way of spelling where “luv wood be enuf.”

Carnegie’s belief was that nations could resolve disputes without resorting to war. He was driven to build on the Geneva Conventions by sponsoring the 1899 and 1907 conferences at The Hague which gave the world its first outline of international law and the rules of war. His vision was that an international body should sit in the Palace of Peace that he had built in The Hague to arbitrate on conflicts and preserve the peace. He was one of the strongest supporters of the concept of a League of Nations.

As the storm clouds gathered, Carnegie formed the Carnegie Council for Ethics in International Affairs in February 1914 to drive forward a peaceful settlement as a matter of urgency. Even then he was confident that war could be averted, and that humankind would find an intelligent way to arbitrate itself out of conflict. So much so, indeed, that the founding charter of our organisation states that the Trustees should, when peace prevails, dissolve the Council and give its funds to the “deserving poor.”

Andrew Carnegie’s hopes were crushed with the outbreak of the First World War.

So why did he fail?

First, Carnegie himself and many who followed him fell into a trap of “moral perfectionism.” They believed nations could somehow move above power politics simply through the force of reason.

The second reason was that nations have found it difficult to feel themselves accountable to large faceless bureaucratic institutions that they don’t feel are very accountable to them. Despite their predecessors having helped create the UN, successive U.S. Presidents since have seen the UN, for instance, as an instrument of power—as a means rather than an end to international politics.

Andrew Carnegie has, however, left a legacy in the recognition of universal human rights. People are more aware there are international standards and have a better notion of accountability. Paradoxically the biggest advocates of restraint and standards in areas of conflict are the military. In the run-up to Iraq in the U.S. it was the politicians not the military that wanted the war.

In fact it has been governments, not their citizens or the military, who have prevented Carnegie’s vision from being realised. Perhaps in an age of instant images of the effects of war, people will increasingly manage to tell their governments to talk their way out of armed conflict.

And on that day we will be able to give the funds that Andrew Carnegie invested in setting up our Council to the deserving poor.